Creating a Chic Vibe for Your Mad Men-esque Office 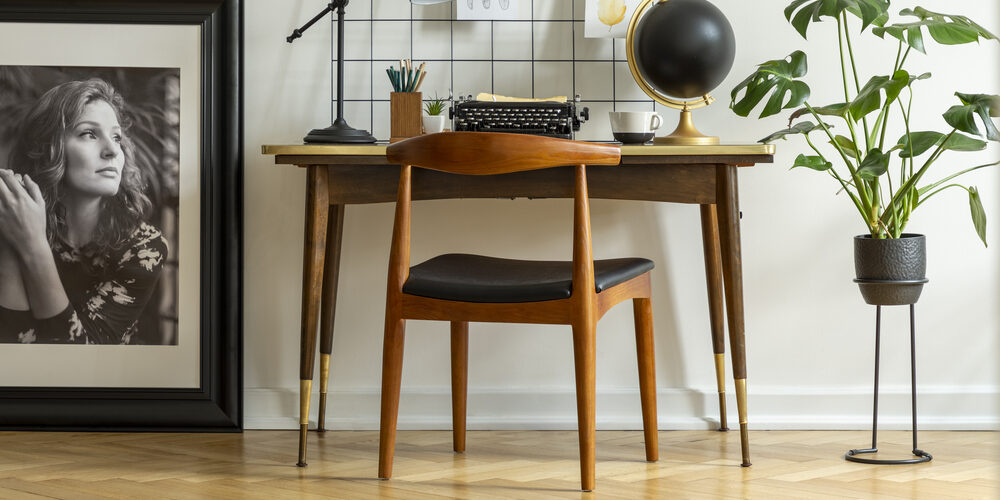 The airing of the series Mad Men was a weekly deep dive into the smooth-talking ad world that I aspired to envelop myself in. I wanted to be them. Not the men, per se. I just wanted their status and their suits and… their offices. They had some classy ass offices. I mean, don’t get me wrong. I appreciate an open office layout as much as the next guy, but it’s not exactly conducive to napping or sipping scotch straight while my minions run my errands.

It’s a different kind of life. My favorite thing about the office set design, was the decor. There was something so classic, yet inspired about the whole look. Sure, you can throw a couch and a coffee table in your office and call ‘er done. But if you want to impress your clients AND your coworkers, do as Don Draper said, “Make it simple, but significant.”

Even if the rest of your office is understated, the desk should speak volumes. You want it to say “power.” That the person who sits there is powerful. Mid-century modern design or “MCM” (which is what set designers used in Mad Men) is known for clean lines and minimalism.

You’d rarely find a “cube” style desk where an entire piece of plywood covers the back, with bulky drawers on both sides. No, they traded that for geometrically angled, peg legs and minimal storage. Whether you’re choosing a rectangular shaped desk or an oval one (which is a popular shape for MCM), sexy table legs are everything.

The accoutrements that you pair with your desk are equally as important as the desk itself. Every desk needs a lamp. Find an MCM lamp that highlights another color in the room. Perhaps from a painting or chair. Typically these had a slim stand with a flared or sphere-like bulb-cover/shade.

Want to add some swank to your desk? Purchase a pen stand and have it engraved with your name/initials. Your clients will be itching to sign.

Also, because what’s on your desk says a lot about you… and minimalism was the key to the Mad Men time period, keep it tidy. Purchase a slim file organizer with a sleek (gold, silver, wood) finish, that features those sexy legs I mentioned earlier.

Mid-century modern is all about functionality. How well an item could serve its purpose was equally as valuable as the design. Flared and curved backs, solid plastic, wood, even leather are all features of MCM seating.

When this design became popular, designers were beginning to use materials that they hadn’t previously considered, as well as using materials (wood, steel, plastic) in the raw, rather than covering them with fabric.

The sleek shapes associated with MCM is what will make a statement in your office though. Whether you decide to purchase a stationary or wheeled chair, the shapes are endless.

This has to be one of my favorite features of the Mad Men office or really, just the time period itself. Between lounge chairs and TV stands (which you probably wouldn’t have in your office), I can’t decide. But MCM chairs are so. much. fun. They exude futurism with their funky dips, slopes, and shapes (hammock and egg and mushroom-like). Plus, they’re definitely some of the most comfy chairs I’ve ever sat in.

If you’ve got your own office, chances are, your job requires you to spend a good amount of time there. So you want it to be comfy, but also functional for clients and casual meetings.

The great thing about mid-century modern couches is that they’re typically the same shape. They have straight backs with no extra fluff. Overstuffed couches are a thing of the future. If you want to stick to the past (the mid-century past), use minimal to no accent pillows, and look for those characteristically peg or slim, cylindrical legs.

Another thing to keep in mind is, COLOR. Wherever you decide to use it, make sure it POPS. Typically bright or even dark orange, green, red, and blue are colors that mimic the psychedelic feel from the 60s.

Coffee tables that follow the MCM design are similar to the desks I mentioned above, but there are also other variations. Geometrically shaped table tops were very popular in the 60s. As well as small, circular table tops of varying heights and sizes. Typically, the circular tables are stacked slightly beneath one another for a sort of “nested” look.

And don’t forget to add a few mid-century modern architecture magazines, National Geographic, and a magazine that highlights the city/state you live in. Your guests will appreciate the effort, even if they never have a chance to peek into them.

Other “Way Out” Décor

Art. Art from that decade was a HUGE deal. So much, that they plastered their rooms with wallpaper that displayed funky designs. But you don’t have to go that far. Anything by Andy Warhol, Roy Lichtenstein, Robert Rauchenburg, Bridget Riley, Carl Andre, or Joseph Kosuth would give you the psychedelic feel you’re going for. They feature bold colors, optical illusions, and pop culture icons.

Throw in a little greenery for a fresh feel. You can buy a faux Ficus or Fiddle Leaf for less than $200. Or, if you trust yourself to keep one alive, you can get a real one for around the same price.

Ok honestly, my favorite scenes in Mad Men, are when they’re drinking. It’s so casual and masculine and fitting for that era. A time before smoking and drinking in the office were considered taboo. A time when people cared about issues that would affect the world, not just the self. So even if you’ve only got your mom’s old couch in your office, you need this badass file cabinet/wet bar. Don’t thank me later. Thank me now.